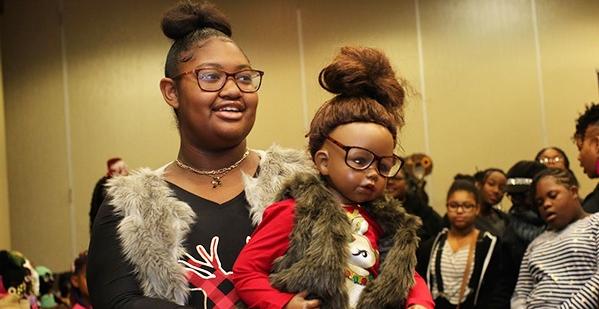 *Detroit, MI — Sandy’s Land LLC is an entertainment service where the mission is to “Party with a Purpose” and it will be celebrating its 7th Detroit Doll Show with a unique program geared toward the entire family on Saturday, November 10, 2018 from 11am to 6:30pm at the DoubleTree By Hilton, 5801 Southfield FWY, Detroit MI 48228 (near Ford Road).

The Detroit Doll Show is coined as “the largest of its kind in the Midwest,” because it caters to African American children, women and collectors with an emphasis on honoring black heritage. The Detroit Doll Show mission is to celebrate history, culture, beauty and self love with dolls of color. It has been featured in the Michigan Citizen, The Detroit News, BLAC Magazine, The HUB Detroit, Metro Parent, American Black Journal/PBS, Black Doll Collecting and Dolls Magazine.

The event draws in over 1,300 attendees and the goal for 2018 is 5,000. Dell Sanders stated from 2017, “Another successful show! I’m so glad I was able to attend this year and to gift tickets to some first timers. I overheard several attendees say how well the show compliments and represents us and they were so right and there was a sea of happy smiling little faces to prove it.”

Their motto is “Love the Skin You’re In” and “Image is Everything” because it’s healthy for a child’s self esteem to play with a doll that reflect their image and empowering for collectors. Be prepared to shop with unique vendors before the Christmas holiday and participate with some Dollightful “Black Empowerment” at Sandy’s Land 7th Annual Detroit Doll Show on Saturday, November 10, 2018 from 11am to 6:30pm at the DoubleTree By Hilton, 5801 Southfield FWY, Detroit MI 48228.

Early Bird, Single and Group Tickets are sold online at www.detroitdoll.bigcartel.com. Tickets will be sold at the door for $10.