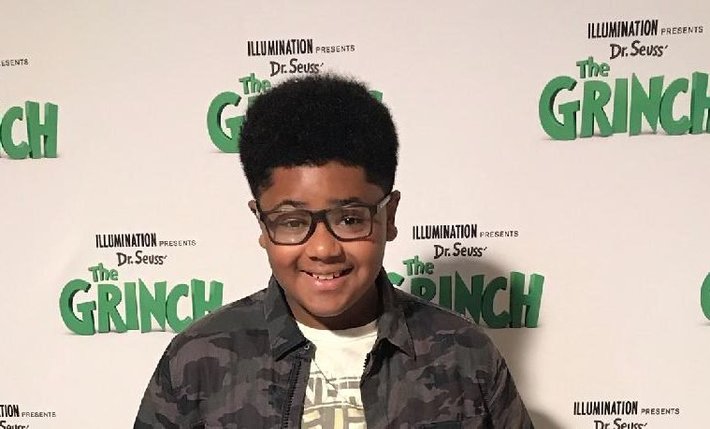 *Hi everybody! My name is Caleb William Cox and I recently had the honor of meeting my favorite actor Benedict Cumberbatch in New York City. I interviewed Mr. Cumberbatch and his co-star, Cameron Seely who plays Cindy Lou Who in the new movie “The Grinch,” which opens in theaters today, Friday, Nov. 9.

Before the interview with the pair, I had an opportunity to see the animated film and here are my impressions. First unlike the last live action version, this one is animated. In my opinion, this film version takes you back to the original grinch story. It gives you a bit of childhood nostalgia.

Next, the movie, though a tale of a grump who is out to steal the joy of Christmas, puts you in the holiday spirit. It gives you that warm and fuzzy feeling inside that puts you right back into the imagery of your parents’ story telling spell of this American household treasure.

RENDING: TRUMP CALLS APRIL RYAN A ‘LOSER’; MIGHT REVOKE HER & OTHERS’ PRESS PASSES

I think Benedict Cumberbatch played the perfect role as The Grinch.  The first thing that I noticed about his version of The Grinch character was how Mr. Cumberbatch voiced the character. In my observation of his voice in general, it is usually very deep. But his voice in the movie had a much higher pitched tone and took on various vocal ranges. It was amazing that he was able to texture and transform his voice like that. Mr. Cumberbatch explains how the voice was created, why he decided to take on this role and how he prepared for the film.

Caleb: When did you decide to take on the role as the grinch?

Benedict: I was very fancied when they asked me. This is an all-American icon, and I was kind of surprised, I thought what have you heard in private? Have you heard stories about me being grinchy? And we really just like your voice and this is what I think the grinch sounds like, oh we want you to do it in your own accent, and then I was like what? I don’t get it and then I realized ok maybe I’ve played a few socially awkward, slightly angry outsiders who can be a bit rude to people like sherlock maybe people like that but, this guy is very American so we discussed that for a bit,  came up with a voice and its really good fun doing animation its weird and unlike anything else, that’s one of the reasons I love it because your not in front of a camera, you don’t have to worry continuity and its very free and playful.

Caleb: How did you prepare for this role?

Benedict: I prepared for this role mainly by reading the book. And, I just loved the original story so I looked at the drawings and listened to the rhythm of the words and what he said and that’s how the voice started to come about but it was very angry and growly and animally because he’s quite demonic in the book ,very pointy and red eyed and after a while he’s gonna a: scare children or b: get a bit more boring if he gets stuck on this angry drip so then it was about remembering that he really enjoys being the grinch, he likes doing what he does as the grinch and, so yeah once the director gave me that note, we were away and we had a lot of fun.

My next interview was with Cameron Seely, who you may know as the character Helen, the role of PT Barnum’s daughter from the move the movie, “The Greatest Showman.” Cameron plays the adorable Cindy Lou Who. We know this character from the original, as the girl who sees Santa, The Grinch, stealing the family Christmas tree and asking why? Cameron’s character in this film is older, with a mission to help her over worked mom get a much-needed break from her hectic life.

Producer Chris Meledandri explains. “In this version, she is a little older, and she’s on a mission to trap Santa to asks him to help her over-worked, over-tired mother. We wanted to find a character who was the antithesis of the Grinch. Someone who was incredibly helpful and embodied the optimism that childhood allows us to have.”

I was really nervous and excited to meet the actor who plays Cindy Lou Who. I think that Cameron Seely played a great role and her voice was very fitting for her character. Here is what Cameron had to say about her experience.

Caleb: What did you enjoy most about doing this film and playing this role?

Watch Caleb interview Benedict and Cameron, the stars of “The Grinch”:

I had fun watching this movie because it really showed the comedic side of the Grinch. After watching the two previous movies, which were more serious and focused on the main objective, which was the meanness of the Grinch. This version, gave us the grinchy feel in a more sympathetic Grinch character.

As far as my other impressions of the movie, Kenan Thompson did really well playing the new character Bricklebaum, the Grinch’s neighbor, who is always in a positive mood, with a great love for Christmas. The directors really did a great job of telling the animated story without losing the essence of “The Grinch Who Stole Christams,” the book it’s based on. The movie also brought back good old memories of home, and the warm and fuzzy feelings of the holiday season. Go see “The Grinch!”