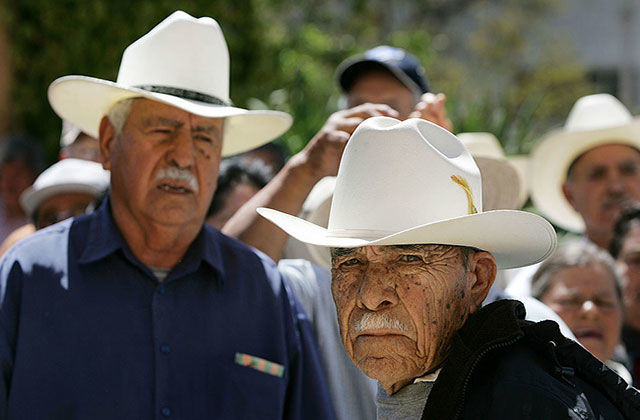 A new statue called Bracero Monument was unveiled in Los Angeles’ Migrant’s Bend Plaza on Sunday (September 29). Braceros were workers who temporarily migrated to the United States to work on farms, mines and railroads, helping to fill labor shortages as a result of World War II. The monument highlights the 4.5 million Mexican nationals who worked in L.A. from 1942 to 1964.

Created by artist Dan Medina, the 19-foot bronze statue shows a worker holding a hoe—“el cortito”—for field work, while standing beside his wife and young child. Medina completed the scene with a pile of workers’ tools. For the L.A.-native artist, whose stepfather was a bracero, this work is personal. “The immigrant has been demonized,” Medina told the Los Angeles Times. “Although many complain about the immigrant, if you look at history through the scope of honesty, we wouldn’t be here without their contributions.”

L.A. City Council member Jose Huizar also feels connected to the work. “My father was a bracero. All my uncles were braceros. And they tell me many stories of the time they would come,” Huizar reportedly told KTLA. “They tell me about the sacrifices they made, sometimes they would go without water during the day, the barracks they put them in, terrible barracks, the living conditions were horrible. But despite these sacrifices, they were appreciative of the opportunity, because they were able to get a little money [and] send it back to their families.”

The monument is part of a larger project that will also highlight Indigenous, Black and immigrant cultures from many L.A. communities.