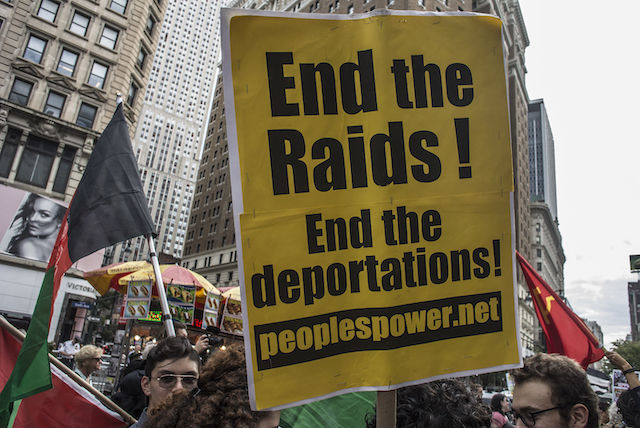 Unless lawsuits against it are successful, the Trump Administration is planning to carry out immigration raids of homes and workplaces across the country starting on Sunday (July 14), reports The New York Times. Immigration and Customs Enforcement (ICE) will target at least 2,000 people who have been ordered deported but remain in the country. The raids may also capture people in their proximity such as children.

Democracy Now reports that ICE raids will take place in Atlanta, Baltimore, Chicago, Denver, Houston, Los Angeles, Miami, New York and San Francisco. Raids were set to take place in New Orleans but the city announced that ICE will postpone the roundups due to Tropical Storm Barry. There are lots of resources online for how to cope with raids. Here are a few of the best:

Colorlines sums up what you should do in advance of raids. » We Have Rights campaign offers a preparedness tip sheet that you can download and fill out along with helpful tips for how to store it. The sheet prompts you to list out essential information including your emergency contacts, your consulate and your child’s medication. » Immigrant Legal Resource Center has tips in English and Spanish to help prepare children for possible family separation. » National Immigration Project has a comprehensive illustrated guide to handling a number of situations.

​​​​We Have Rights has animated videos voiced by Jesse Williams that run you through what to do if ICE comes to your home, stops you in the street or comes to your job. Languages include Spanish, Arabic and Haitian Kreyol. » The ACLU presents a range of scenarios, including being stopped in the street.  » Toward the bottom of the page, the American Immigration Lawyers Association has a list of rapid response hotlines in select cities and states. »The Immigrant Defense Project, a clearinghouse of information generated by organizations around the country, has six infrographics that show you how to deal with ICE at your door, in English and Spanish. They include a list of lies that ICEagents routinely tell people. Top ruse: ICE agents pretend to be local police. » Also from the Immigrant Defense Project are know-your-rights posters and booklets in 16 languages. ​​​​​​

Informed Immigrant has a database of service organizations searchable by zip code and coded according to what they do, from providing legal help to connecting you to mental healthcare. » The National Immigration Law Project has a searchable network of attorneys in many states. » The ACLU compiled a list of large national organizations that provide legal help to immigrants.