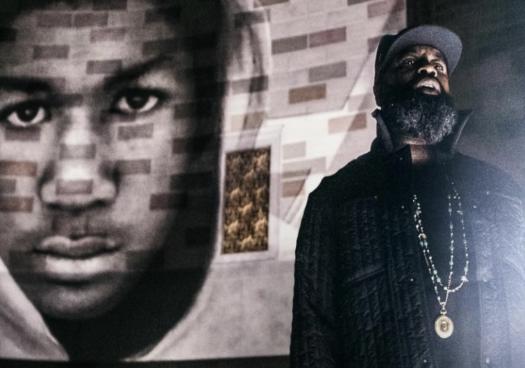 *Grammy® Award-winning rapper, Tariq “Black Thought” Trotter, lead MC of the hip-hop band The Roots, has recorded an original composition, “Rest In Power,” that will air as part of a new six-part original documentary series, “Rest in Power: The Trayvon Martin Story.

Trotter’s powerful original musical tribute pays homage to the life and legacy of Trayvon Martin, whose death became the catalyst for the Black Lives Matter movement. Filmed in Gotham Hall, footage from the original documentary series becomes larger than life as it is projected behind Tarik while he performs his original piece for the music video directed by Rohan Blair-Mangat.

The full music video can be viewed on Paramount Network’s YouTube Channel and ParamountNetwork.com. With the song’s commanding lyrics and the video’s powerful imagery, Trotter and Paramount collectively agreed that the project deserved a bigger audience. On Monday July 23rd, 2018 both the video and track will be available on all digital streaming platforms with 100% of the proceeds going to The Trayvon Martin Foundation.

Trayvon Martin was an unarmed 17-year old African American high school student shot and killed by a neighborhood watch member in the Sanford, Florida community on February 26, 2012 where he was visiting a friend with his father. George Zimmerman was acquitted of a second-degree murder charge utilizing Florida’s Stand Your Ground Law, claiming he shot Martin in self-defense.

The fatal encounter between Trayvon Martin and George Zimmerman and the subsequent trial polarized the nation, sparking outrage and protests and shined an unforgiving light on issues including race, politics, power, money and, gun control.

Interviews combined with home videos, family photos, and news footage will take viewers beyond the news cycle and offer an intimate look at the story of a young life tragically cut short and that spurred a movement giving rise to a rallying cry that still resonates today, #BlackLivesMatter.

“Rest in Power: The Trayvon Martin Story” also addresses the significant cultural and societal issues surrounding the tragedy as well as an in-depth examination into the investigation, trial, and the not-guilty verdict.