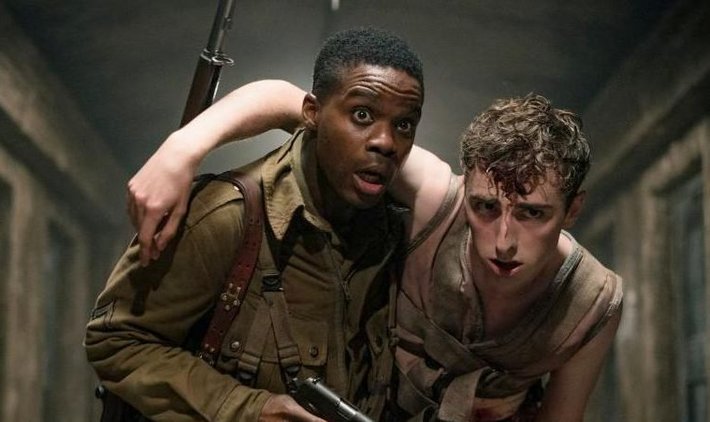 *“Overlord” and “The Girl in the Spider’s Web” are action packed movies in theaters today. However, action is just about all “The Girl in the Spider’s Web” has going for it. In “Overlord,” the action is accompanied by a captivating storyline. The first half of “Overlord” draws one into the narrative before there is any semblance of a man-made monster. Although the monster mash gets silly, I would not put it pass the Nazis to have tried to create super soldiers in a lab in order to rule the world.

Kudos to J.J. Abrams’ “Overlord” for having black men as heroes in a war drama at a time that history shows the U.S. military was segregated. The gratuitous blood, guts and gore is par for the course in an era of many desensitized moviegoers.

In “Overlord,” it is the eve of D-Day. American paratroopers are dropped behind enemy lines to carry out a mission crucial to the invasion’s success. But as they approach their target, they begin to realize there is more going on in this Nazi-occupied village than a simple military operation. There, they find themselves fighting against supernatural forces that is part of a Nazi experiment.

‘The Girl in the Spider’s Web‘

“The Girl in the Spider’s Web” comes to the big screen seven years after the compelling “The Girl with the Dragon Tatoo.” In “…The Spider’s Web,” the book and series’ main character, computer hacker Lisbeth Salander (Claire Foy), is called upon to steal a program that has the ability to access codes for nuclear weapons across the globe. If it falls into the wrong hands, the consequences would be apocalyptic.

Script is important for a captivating story, as well as casting. All the explosions, fires, kidnappings, family drama, hijinks, and special effects may save a faulty storyline. Although Claire Foy is a fine actress, it appears she was hired—based on her looks—as the cold, brooding Lisbeth. Rooney Mara, on the other hand, who portrayed Lisabeth in “…Dragon Tatoo” became the character. Audiences became invested in Mara developing into her complex role, and in some respects, bonded with her. “…Spider’s Web” did not lend itself to the same kind of emotional attachment.