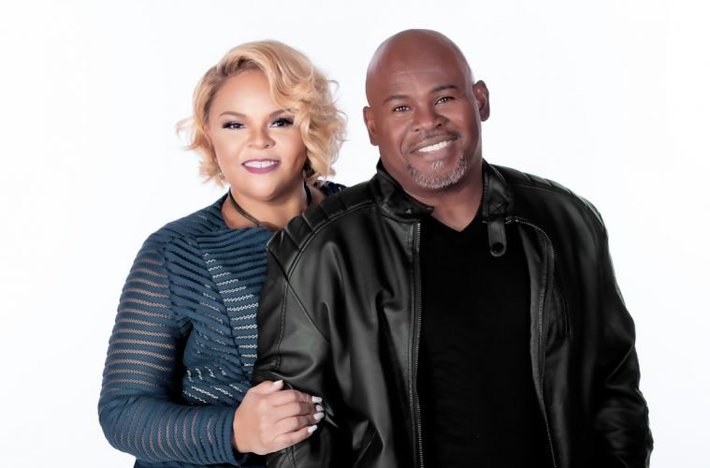 In Part 1 of our story on David and Tamela Mann, the EUR focused on their current tour called “Us Against the World” (purchase tickets here). However, the tour is not the only thing that encompasses their latest project – a book and CD round it out.

The Fort Worth, Texas natives are not coy about their marriage journey with this special project at all. They lay it all on the line in the name of family and helping others.

“The book was inspired by our 30-year journey (of being married),” David told Lee Bailey in a recent interview at Dulan’s, a popular soul food restaurant in Los Angeles. “We’ve been saying we were going to do the book for the last five years, since our 25th anniversary. But we just felt like this was the right time.”

David continued, “We just thought it would be good to share our journey and how we made it even in an industry that’s known for divorce. The divorce rate in the entertainment industry is well over the standard (rate in the nation). We just wanted to share how we did it. One of the ways is, she’s my priority and I’m her priority.”

Rearing their children also played a pivotal a part in the acting/singing couple’s marriage. The Tyler Perry favorites have a blended family of four kids and a niece they raised when Tamela’s sister died. Two of the children were fathered by David outside of the duo’s relationship.

Tamela was very supportive with the first child. However, when David’s second baby came along five years into the marriage, things took a turn for the worse.

“My career took off with Kirk Franklin and (the mother) came out of the woodwork that he had a daughter,” Tamela said. “I felt like I accepted one child. I can’t accept another child.”

It was this experience that earned the project it’s “Us Against the World” name.

Looking back at that challenging period, David recalled, “I felt like I was along. I felt like she was leaving me. She was like you got this baby mama to deal with and that baby mama to deal with, and she was like, ‘Where do I fit in? I’m going to get lost.’ I had to let her know, ‘That it’s me and you against all of this stuff. So, it’s you and me against the world.”

David’s commitment to Tamela, “Just gave me confidence that he would take care of me,” Tamela said. “I didn’t have to worry about being in the middle. It was us and then everybody else.”

TRENDING: JADEN SMITH TELLS THE WORLD THAT TYLER, THE CREATOR IS HIS BOYFRIEND! – WATCH

As for the “Us Against the World” CD, you can expect a release of inspirational songs with an R&B twist. Tamela, who has several hit gospel songs and who is the winner of several gospel music awards, admits that the project’s R&B spin took her for a loop.

“It was challenging for me because in gospel you sing a lot harder and with R&B you don’t have to sing as hard,” Tamela said. “And then the sounds are different. The words were coming together too fast. I was stepping into a whole different realm. I got more comfortable after listening to demos. It was easier to sing without the music after I got the structure of the songs down.”

With the vocals in check, Tamela and David put together a CD with themes that go beyond family life. They also tackle social themes such as weight discrimination.

“Growing up, I really didn’t have boyfriends,” Tamela lamented. “You had some people, who wanted to see you, but they only wanted to see you in the dark. I call it in the shadows. They didn’t want to bring me out to the skating rink or to the movies.”

Weight did not stop Tamela from catching her man. She met David in high school while singing in a local group and after about a year love bloomed.

“We were doing that secret lover stuff,” Tamela laughingly revealed. “We were the oldest and messing around and no one knew it. We weren’t sure because we were both talking to other people.”

Jumping in the conversation, David added, “We were really good friends and as time passed we got to know each other. You really grow.”

Well, many of the young men who treated Tamela badly, are kicking themselves now. Not only does she have the talented David by her side, but a singing and acting career that are both fire.

The “Us Against the World – Mann Family Tour” continues throughout the month of November in different cities across the nation. Purchase tickets here.

Meanwhile, you can pre-order both the album and book (coming out November 9 & 13 respectively).