Journalism pioneer Alice Allison Dunnigan will be honored posthumously by the Newseum in Washington, D.C. According to the New York Times, the institution plans on installing a statue to honor Dunnigan, who was the first Black woman to receive press credentials to cover the White House.

Dunnigan—a journalist, civil rights activist, and author—took the helm of the Associated Negro Press Washington Bureau 71 years ago. She spent over a decade penning pieces for various publications and many of her pieces were featured in African-American newspapers that were distributed nationally. During WWII Dunnigan served as a typist for the government. She broke many barriers for Black women in journalism, becoming the first African-American woman to not only provide coverage on the White House but the State Department and the Supreme Court as well.

After her days as a journalist, she worked with presidential committees to create programs for youth and people of color. In 1974—nine years before her death—she released an autobiography about her life and experiences as a woman of color in the media industry titled A Black Woman’s Experience: From Schoolhouse to White House. Dunnigan—a National Association of Black Journalists Hall of Fame inductee—has received 50 awards for her contributions to journalism throughout her career. 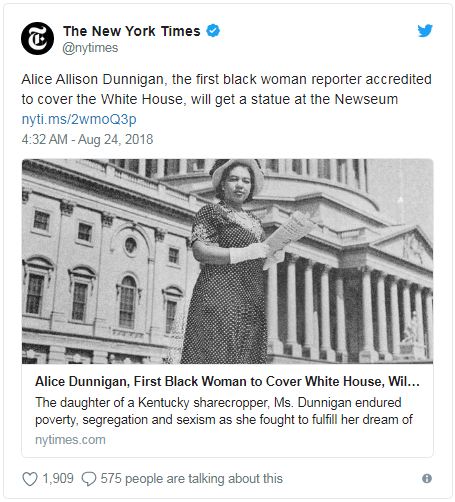 The Newseum believes that it’s time for her unsung story to be brought to the forefront. “Alice was such a barrier breaker for women and people of color, we were happy to have the opportunity to embrace her here at the museum,” Carrie Christoffersen, curator and vice president of exhibits at the Newseum, told the news outlet.

The 6-foot bronze statue—which is being created by Lexington, Kentucky-based artist Amanda Matthews—will be on display at the museum from September 21 through December 16 and then it will be moved to the West Kentucky African-American Heritage Center in the town where Dunnigan was born and raised.