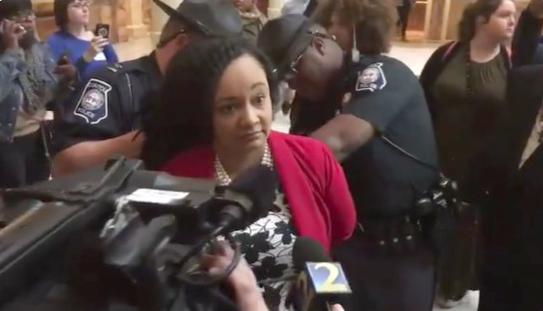 *(Atlanta, GA) — Today, more than 15 were arrested at a rally in the Georgia State Capitol that urged Georgia officials to count every vote.

“Senator Nikema Williams was arrested in the Georgia State Capitol for literally doing her job as an elected official. We are disgusted by the aggressive intimidation tactics by police — the latest effort at voter suppression to silence the voices of Black people. This is 2018 and we will not allow Jim Crow South to rear its ugly head again in Georgia. We demand the immediate release of Senator Williams and all of the peaceful protestors who were arrested.”

WHAT: Emergency press conference after 15+ get arrested at rally to count every vote

Allegations of voter suppression have been widespread in the Georgia election. 12 counties prematurely certified election results in advance of all votes being counted. On Election Day, polling stations across the state reported machine malfunction, five-hour lines, and shortages of voting machines. And last month, Secretary Brian Kemp was reported to have purged 340,000 voters from state registration rolls, many concentrated in Black communities.